Home » The Safest Colleges Campuses in America in 2020

When soon-to-be high school grads decide which college to attend, location, sports, and Greek life are huge factors. But for college students planning for that first year away from home, safety should play an equally important role.

How We Got Our Rankings

Since 2016, we’ve continually updated and refined our methodology to find the safest college campuses in America. This year, we looked at data from the U.S. Department of Education’s Campus Safety and Security and the FBI’s 2018 Uniform Crime Report.

From there, we narrowed our study down to only public, private, and non-profit institutions with a minimum of 5,000 students offering two-or four-year degrees.

We evaluated the safety of a college campus based on a combination of these factors:

After analyzing those factors, we found each school’s overall crime score.

Some colleges didn’t submit information to the FBI, which is why Hawaii, Iowa, Mississippi are missing a safest college on the list below. 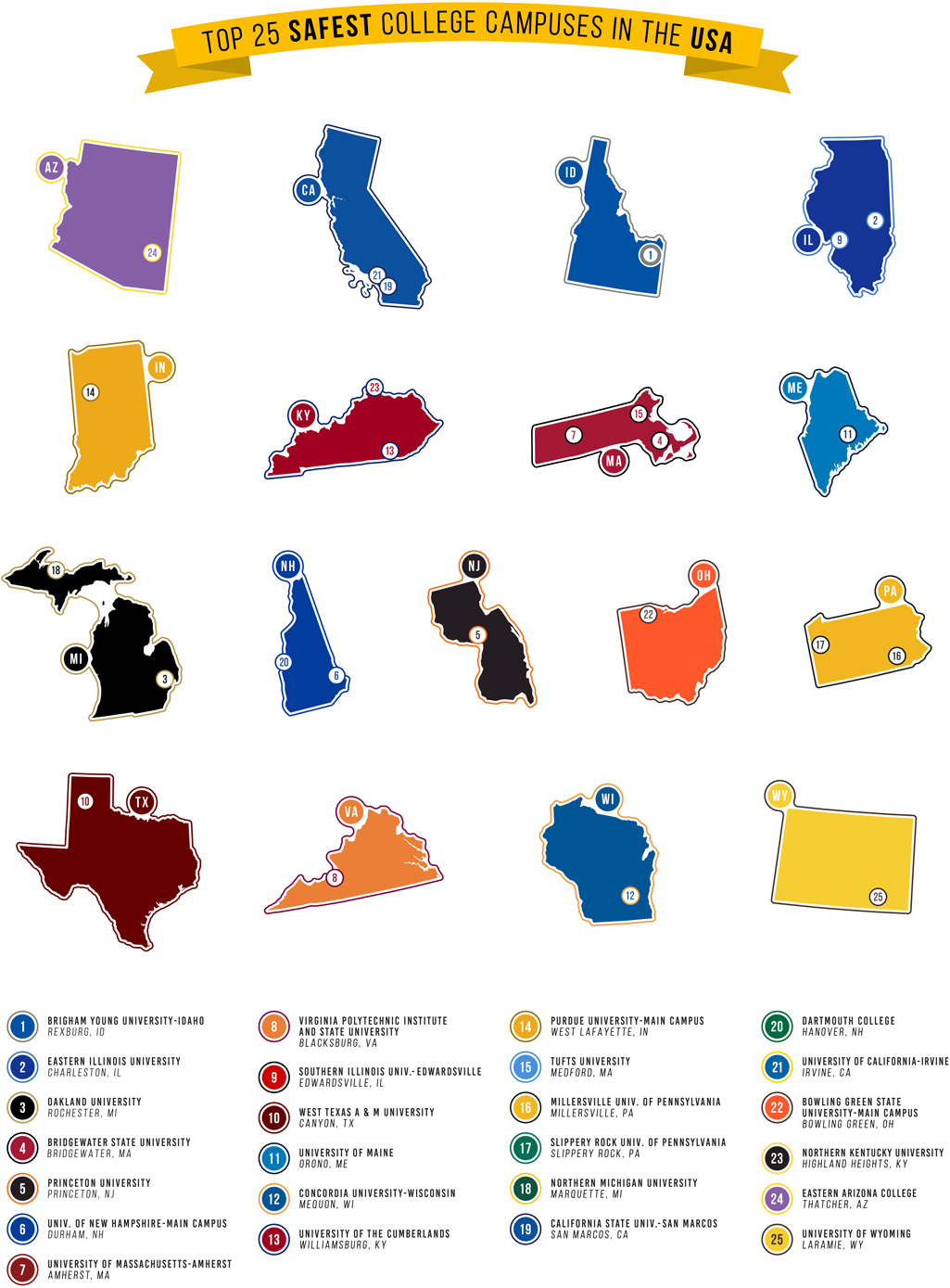 Year after year, BYU-I is one of the safest colleges in the country. Case in point: in 2018, it was crowned the number one safest campus.

Rexburg boasts 0.17 violent crimes per 10,000 people— the lowest of any city on our list. Even beyond the campus, Rexburg is the safest city in Idaho.

With a student body of 7,030 people, Eastern Illinois has one of the lowest student enrollment counts on the list—but it’s still highly safe. For every 10,000 people, only 1.39 violent crimes occur. Plus, it boasts a low property crime of 2.92 per 10,000 people.

The college also has an internet crime complaint center, where students can report online harassment and threatening emails (something most universities don’t offer or advertise).

Like BYU-I, Oakland University made the 2018 list of Safest College Campuses in America—they ranked third for good reason.

Beyond all that, Oakland University offers something we haven’t seen much elsewhere: a direct link to the state’s sex offender registry on its website—a smart move for an organization that fosters on-campus living and social situations that involve strangers mingling.

Beyond all that, the campus has implemented in the following safety measures:

Princeton is one of two Ivy League colleges on our list (the other being Dartmouth). As much as it values its academic rigor, it also clearly values the safety of its students.

Princeton’s overall crime score of 7.63 is lower than Bridgewater’s, but its violent crime rate per 10,000 people is shockingly low: 0.35.

But we’re not finished yet: it also checks off all the right boxes when it comes to crime prevention and crisis management.

The school provides multiple ways to alert students in the event of an emergency, and it offers blue light safety stations, escorts, and a robust section of its website dedicated solely to victim services.

Like many colleges on our list, UMass-Amherst takes strides to implement emergency call boxes across its campus. It’s also made safe ride programs available to students and faculty alike.

Even better, its hate crimes and VAMA rate total a mere 0.67 — one of the lowest on the list.

Virginia Tech’s overall crime score of 8.25 made it one of the eleven colleges on our list to achieve a total crime index below 10.00.

After the 2007 mass shooting at Virginia Tech, the school overhauled its campus safety program, adding electronic signs and emergency messaging systems for text, email, and Twitter. Now, the campus is one of the safest in the nation.

Plus, a student survivor of the shooting created the app, LiveSafe, which many of the colleges on our list have implemented. It allows users to submit tips and alert authorities of nearby crimes.

Although SIU may sit at number nine, its campus has top three-worthy crime stats. The campus experiences a violent crime rate of 0.52 times out of every 10,000 students. Its hate crime and VAWA rate is as low as 1.00 per 10,000.

The only reason it didn’t pull higher is because of its property crime rate of 7.38 per 10,000 people (which is still pretty low, comparatively speaking!).

Its property crime rate is 7.69 per 10,000 people, and it offers on-campus lock shops for students to stow their valuables.

The University of Maine, one of the nation’s top 50 green colleges, also deserves praise for its above-average safety.

Concordia University-Wisconsin has the third-lowest violent crimes per 10,000 people on our list (0.21). And with an even lower hate crime and VAMA rate of 0.08 per 10,000, CUW is a comparatively safe place for minorities and women too.

We like that Concordia provides an anonymous tip line for its student body, and we also appreciate that it offers parking lot escorts for students who feel uncomfortable walking to their cars at night.

13. University of the Cumberlands (Williamsburg, KY)

While many campuses on our list have impressively low hate crimes and VAWA rates, the University of the Cumberlands takes the cake for a hate crime and VAWA rate of zero per 10,000 people.

The school offers several sexual assault, alcohol, and dating seminars for its students, and it provides an easy-to-access call sheet for any number a student may need in the event of an emergency.

Its property crime rate of 8.49 per 10,000 people is almost worth talking about—it’s still lower than twelve other schools on our list.

Sitting pretty in spot number fourteen on our list, Purdue University’s main campus has an extremely low violent crime rate of 0.66 per 10,000 people.

Plus, the campus takes major strides to make its campus safer. For example, it set up 300 blue light phones across campus and put up nearly 200 digital signs to display emergency alerts to students in case of an emergency.

Tufts is one of the few private non-profit universities that made the safest twenty-five college campuses list. It also has one the lowest hate crime and VAWA rates of all twenty-five schools (0.05 per 10.000 people).

Also impressive? Tufts supports the Mass Safe Communities Act, which protects immigrants. It’s no wonder the campus is proactive in protecting all of its students.

Millersville took after Virginia Tech and implemented the LiveSafe app. With this app, students can request to have their location tracked in an emergency.

With an overall crime score of 10.86, it’s clear the school’s safety measures paid off. Plus, Millersville’s hate and VAWA rate of 0.72 is still lower than 1.00.

“Jumping on the bandwagon” isn’t always a good thing, but when it comes to safety precautions and emergency-alert systems, every school should follow their lead.

Slippery Rock University offers a slew of blue safety light stations across its campus—like many in our list—but it doesn’t seem like they get much use. With an overall violent crime rate of only 0.57 per 10,000 people, Slippery Rock has one of the lowest violent crime rates of any school in our top twenty-five.

With a violent crime rate of 1.12 per 10,000 and hate crimes and VAWA rate of only 0.88 per 10,000, Northern Michigan easily earns its spot in the nation’s top twenty-five safest college campuses.

Aside from its noteworthy overall crime score of 11.93, Northern Michigan also deserves a call out for the rape prevention classes it offers women.

With a population as high as San Marco’s (98,088), Cal State is situated in the most highly-populated city on our list.

Even more impressive? In addition to a dedicated Women’s Center on campus, Cal State offers workshops on everything from gender violence and sexual assault to relationship assult and warning signs of dangerous situations.

Ivy League status isn’t the only thing Dartmouth can claim to fame. Dartmouth has a property crime rate of 8.33 per 10,000 people (which is still lower than most campuses in the country), and its violent crime rate bottoms out at 0.69 per 10,000.

The school also outlines tons of safety tips for its students on its website, plus the campus police department offers self-defense courses for those interested.

The campus is located Irvine, CA, which has a violent crime rate 85% lower than the country’s crime rate.

Like many colleges, university police patrol the campus 24-hours a day. But unlike other campuses in the country, its violent crime rate is 0.75 per 10,000 people, and its hate crime and VAWA rate is only 0.87 per 10,000 people.

Many colleges offer a less-than-impressive safety section on their websites, but Northern Kentucky University gives students a breakdown of every emergency action plan, so they’ll  know what to do in the event of a tornado, active shooter, and even a psychological crisis.

Believe it or not, Eastern Arizona College has a violent crime rate of zero. You heard that right: zero. That’s the lowest on our list — even lower than the list’s overall safest university, BYU-I.

Also at zero? Its hate crimes and VAWA rate. The only reason we think it didn’t pull higher is because it has one of the highest property crime rates on our list: 13.87 per 10,000 people.

Even still, no single incident of violent, hate, or VAWA crimes deserves all the gold stars.

Although the University of Wyoming may be the last school on our list, it’s still one of the safest campuses in the nation (and it has plenty of campus safety measures to boot).

The college’s violent crime rate of 0.98 and hate crime and VAWA rate of 0.80 don’t even reach 1.0 per 10,000 people. Plus, UW offers a mental health and suicide crisis hotline after-hours and on weekends for students that need to speak with a counselor.

Campus danger usually manifests in the form of violent crimes and property thefts, so we appreciate UW’s efforts to think outside of the box when it comes to student safety.

The Safest College in Each State 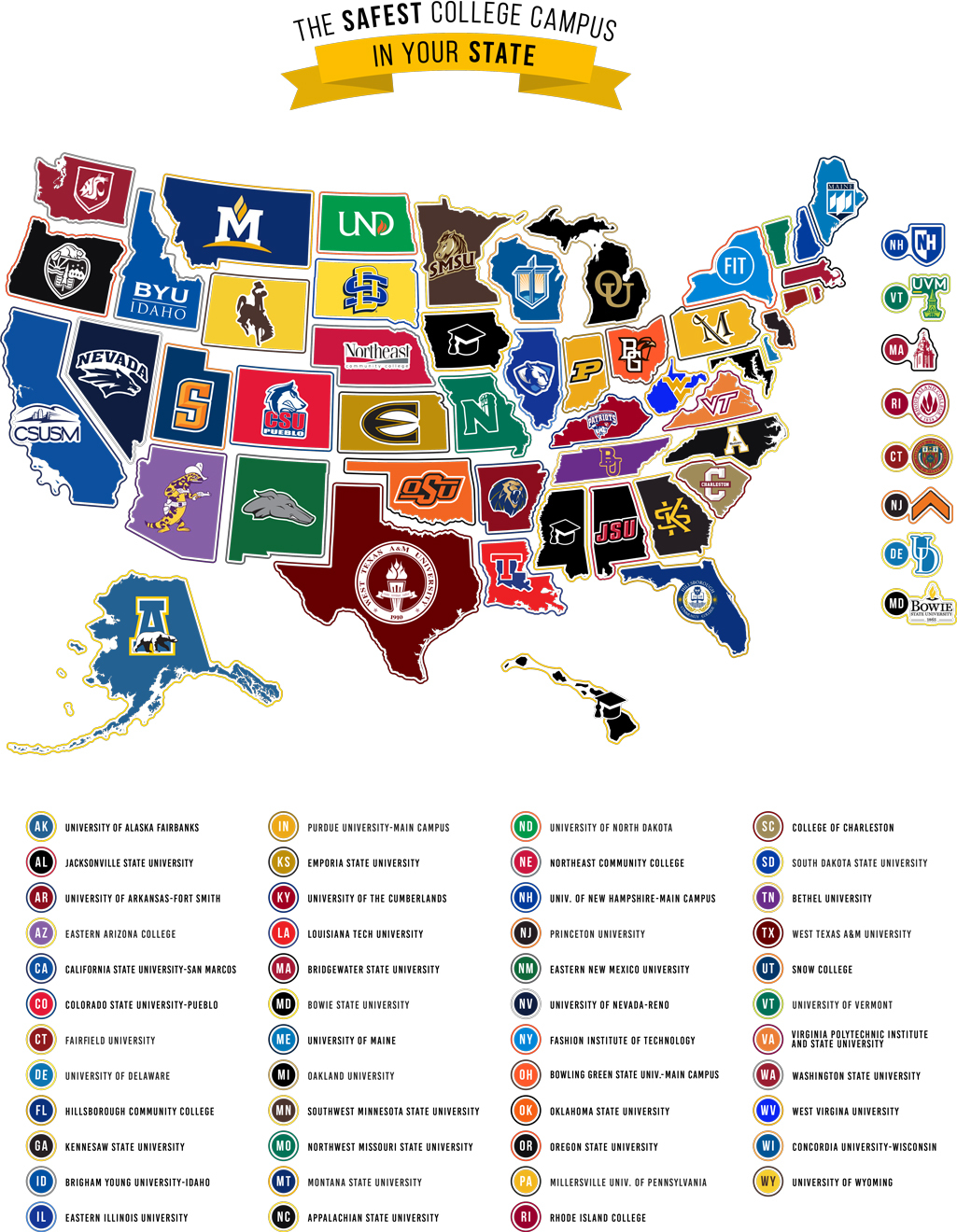 What Is America Worried About? The Most Googled Safety Issues Fueling Your State’s Concerns